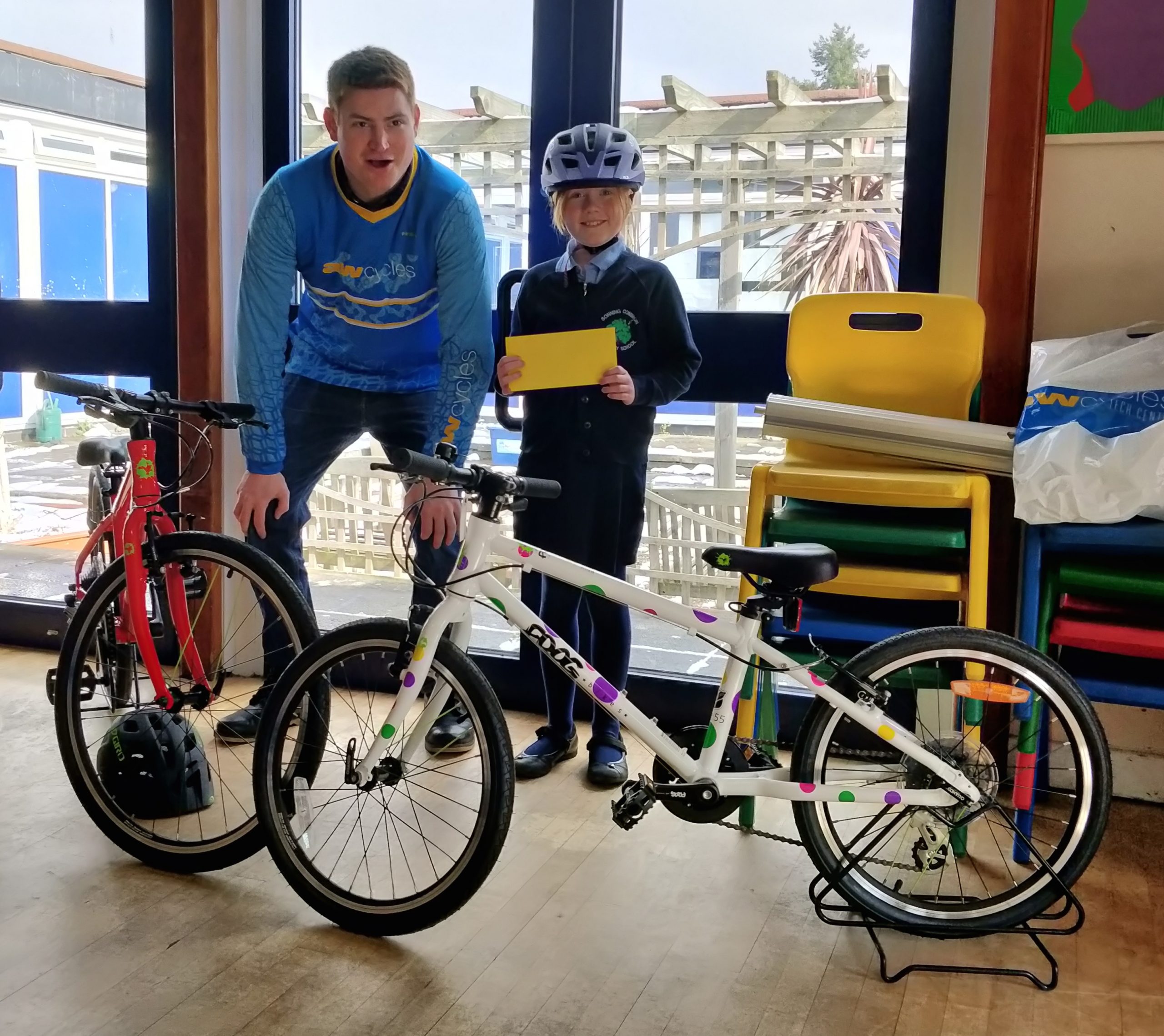 Riders have until 9pm this Friday 23rd March to register online.

Entry fees are £5 per person, online in advance. Riders can register on the day, but there can be queues and it’s more expensive – £8 per person – so please register in advance if you’re cost-conscious!

Two On Your Bike riders are celebrating after winning the OYB2018 draw. Sarah Laing from Henley won a bike from AWCycles. “That’s amazing!” she said, “Thank you so much.” Sarah takes part in On Your Bike every year with her husband Nev and her sons, James, 14 and Matthew, 12. Sarah said, “We just really enjoy it. We love that it’s local. It’s so much fun.” The second prize of a bag of cycle safety equipment, including a helmet, was won by Year 5 Sonning Common Primary School pupil, Holly Winch, who was delighted.

The On Your Bike Cafe is open before, during and after the event, for breakfast, lunch, hot drinks and delicious snacks. 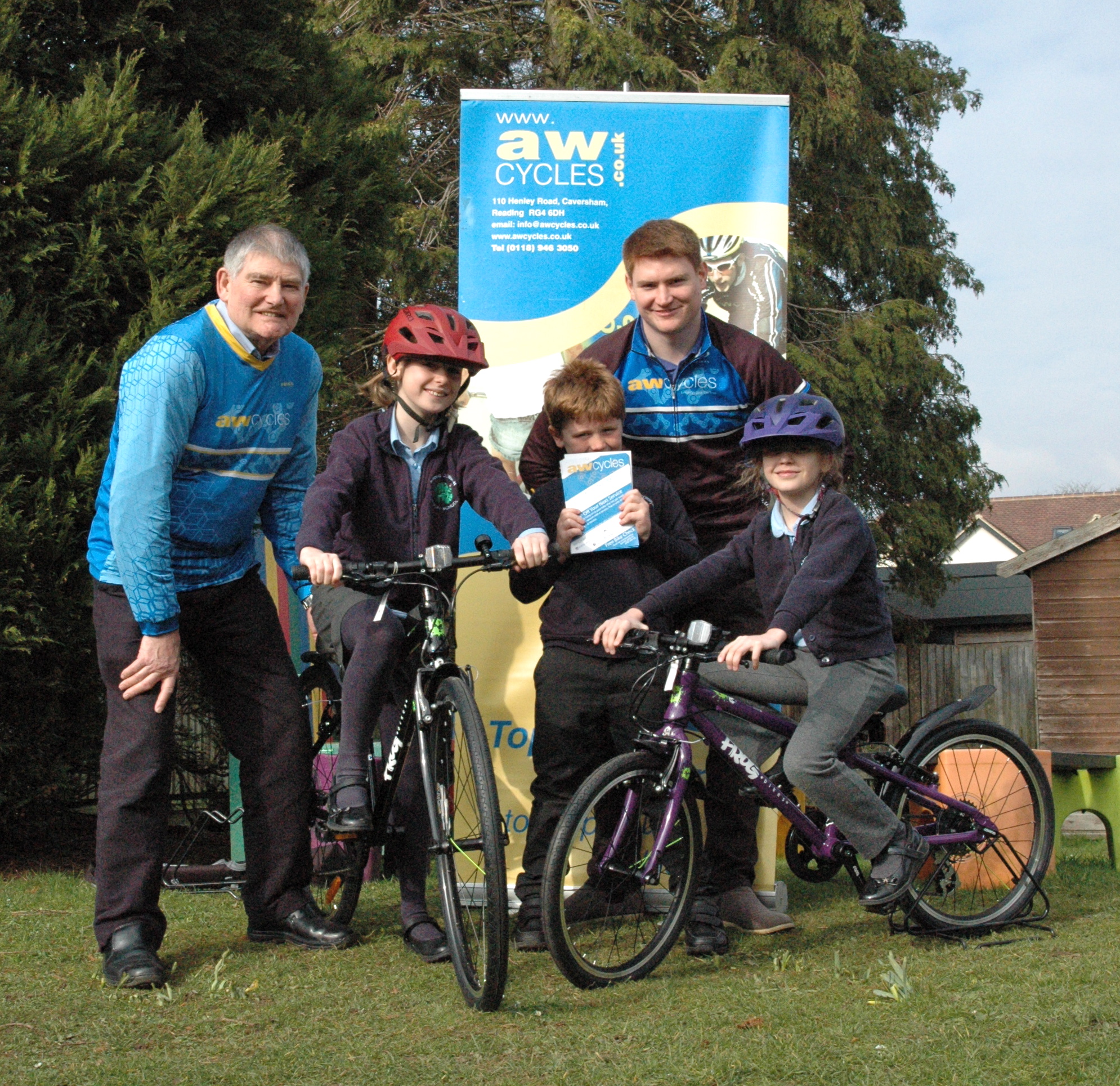 Chance to Win a Bike!

On Your Bike 2018 WIN A BIKE from AWCyles draw is open.

Everyone who registers for the ride on our website before 9pm on Sunday March 18th gets the chance to WIN A BIKE kindly donated by AW Cycles.

Rob Bowen from AWCycles said “I love cycling. I’m a big kid at heart. This is such a great community event, we’re delighted to support it and we are offering all riders free bike checks beforehand at our shop in Caversham.” Rob will also be on hand at the event itself for last minute help and adjustments.

Registration for OYB 2018 is OPEN

Our feel-good family cycle ride is earlier in the year than usual this year, so don’t forget to register in time!

“I’m always delighted by how much enthusiasm there is for On Your Bike,” said OYB founder, Penny Snowden. “With almost 600 riders of all ages and abilities pedalling with us last year, we can’t wait to see how many people join us this year.” 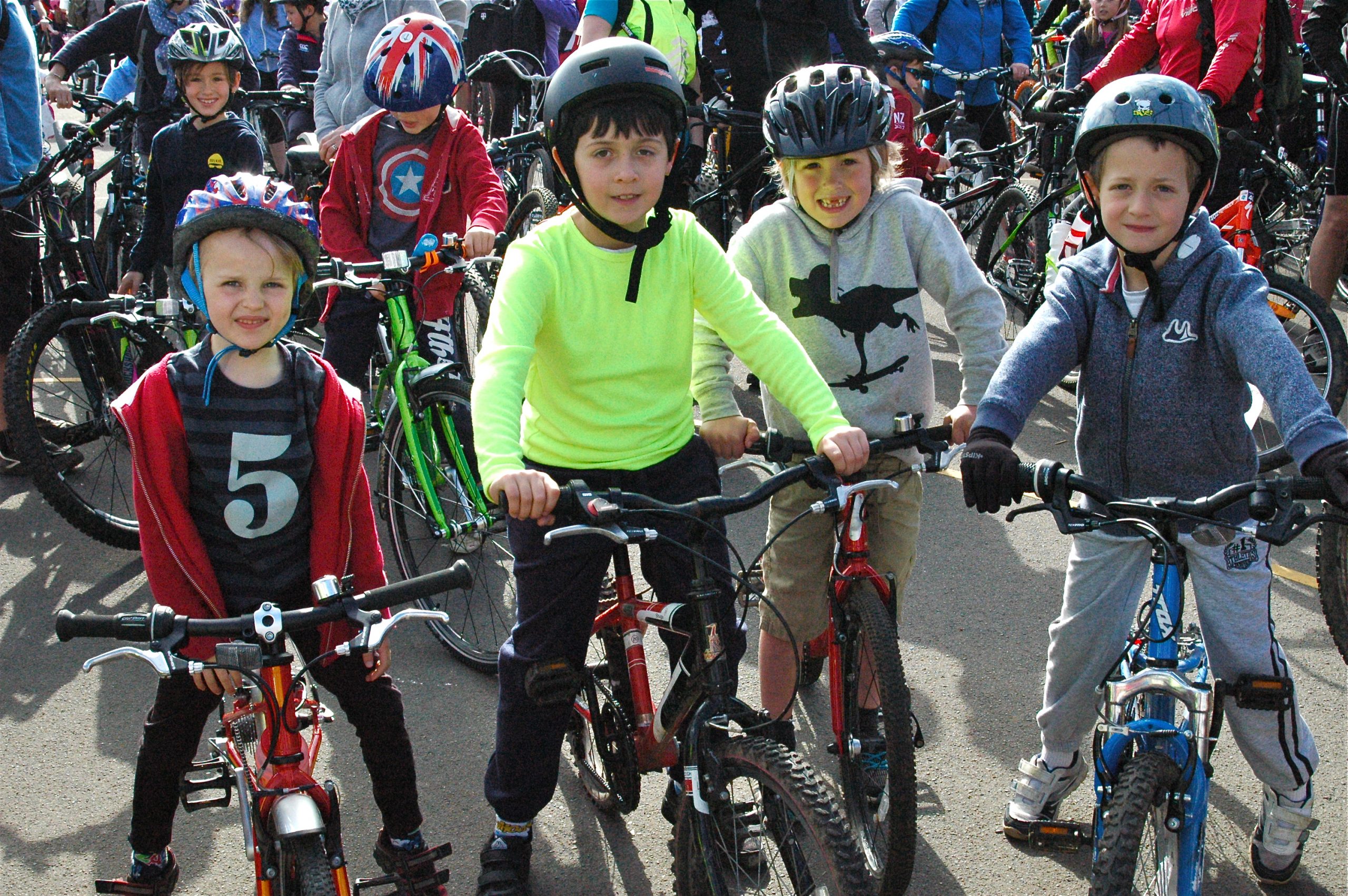 You helped us raise more than £6,000 for the school & local good causes this year; more than any previous year.

“It was a stunning turn-out on a beautiful spring morning,” said On Your Bike founder, Penny Snowden. “The enthusiasm of all who took part, and the fantastic crew who organised, marshalled and cooked, ensured it was the best event we have ever staged.”

The number of riders hit a record high this year, with 599 people cycling one of the three 6,12 or 20 mile long routes, plus dozens more little ones joining in the playground cycle. The event was attended by well over 700 people in total.

Without our sponsors, listed below, this event would not be possible. We thank you once again for your unfailing generosity.

One more sleep to go!

If you need to register on the day, please arrive earlier.

On Your Bike’s Cafe opens at 9.30am, so you can enjoy a pre-ride bacon sandwich! Hot drinks, food & cakes are available right through the morning and lunchtime.

Please help us keep our riders safe by NOT parking in Grove Road.

Winning Smiles at On Your Bike Draw

AW Cycles pulled out all the stops for our On Your Bike draw winners again this year. Mrs Fox’s father, Dave Tyldesley, won the first prize of a free bike.

The second prize of a £100 voucher was won by Evie Gainsford, 8, who can’t wait to join her friends and family on the ride this Sunday April 2nd. Thank you to Miley and Issac for pulling the tickets out of the hat!

There’s still time to REGISTER IN ADVANCE
Entry fees are £5 per person, if you register online in advance. Registration closes at 9pm this Friday.
Riders can register on the day, but there can be queues and it’s more expensive – £8 per person – so please register in advance if you’re cost-conscious!

Please help us keep riders safe by NOT parking in Grove Road! 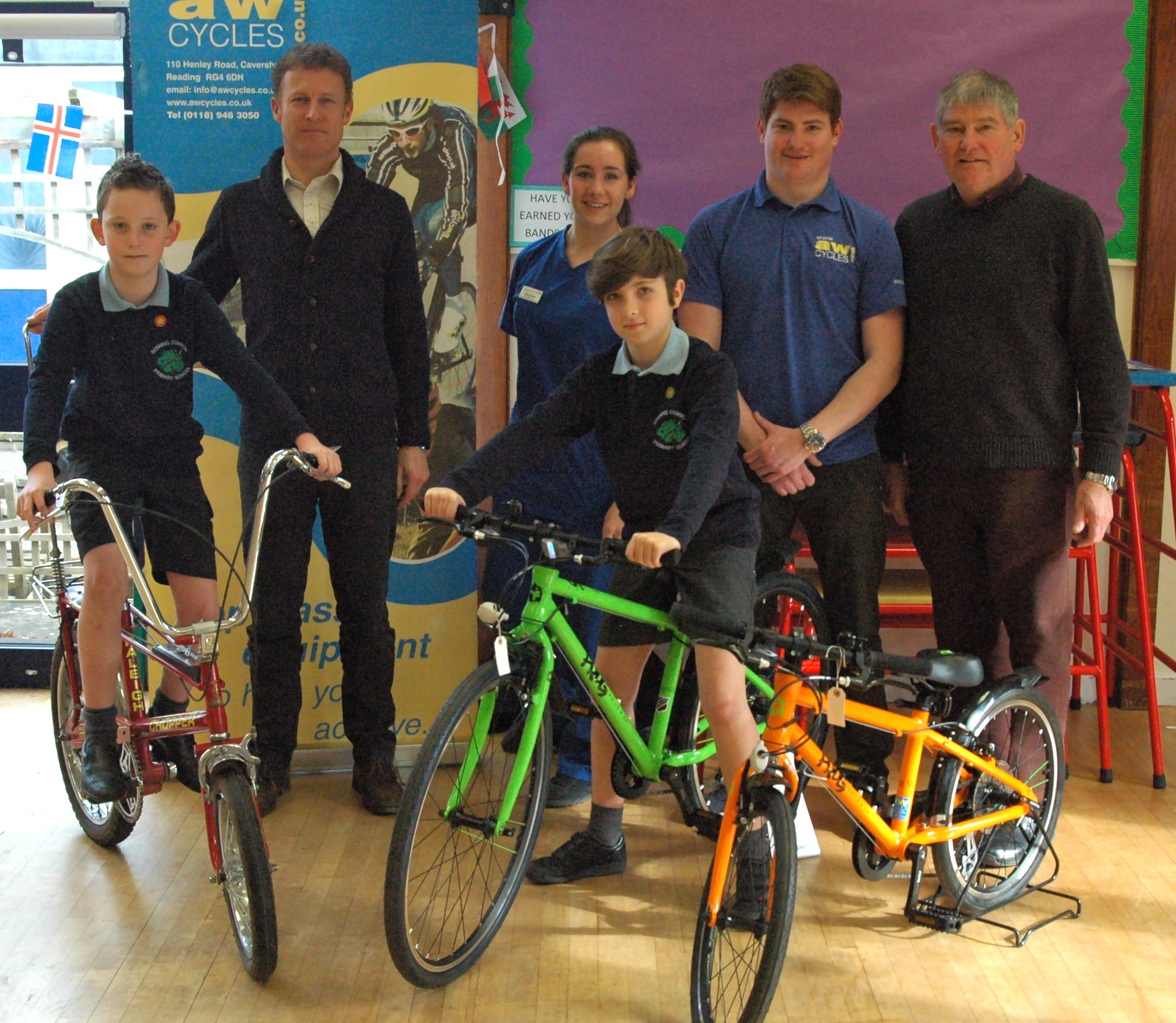 “Cycling gives you a sense of freedom,” Henley cyclist, Matt Richardson, told children at Sonning Common Primary School. “You can’t beat the feeling of going fast in the open air, particularly on the flat or down hills. It’s like flying”.

Matt Richardson inspired children to sign up for this year’s On Your Bike with stories of pedalling his 1975 Raleigh Chopper bike up mountains, often overtaking cyclists who were much better equipped. He’s also set a World Hour Record on his Chopper.

“If you’re worried about the distance,” Matt told the children, ahead of the annual feel-good family ride on Sunday 2nd April, “don’t ride too fast at the beginning. Don’t worry about how fast everyone else is going. The ride is about what you yourself can achieve.”

Claire Burnett, a Senior Emergency Dept Staff Nurse at the Royal Berks, is a former pupil at the school and told everyone she’d cycled On Your Bike with her family at least 8 times. She urged the children to make sure they wore their helmets.

Register before 9pm on Sunday March 26th for the chance to WIN A BIKE, kindly donated by AW Cycles. 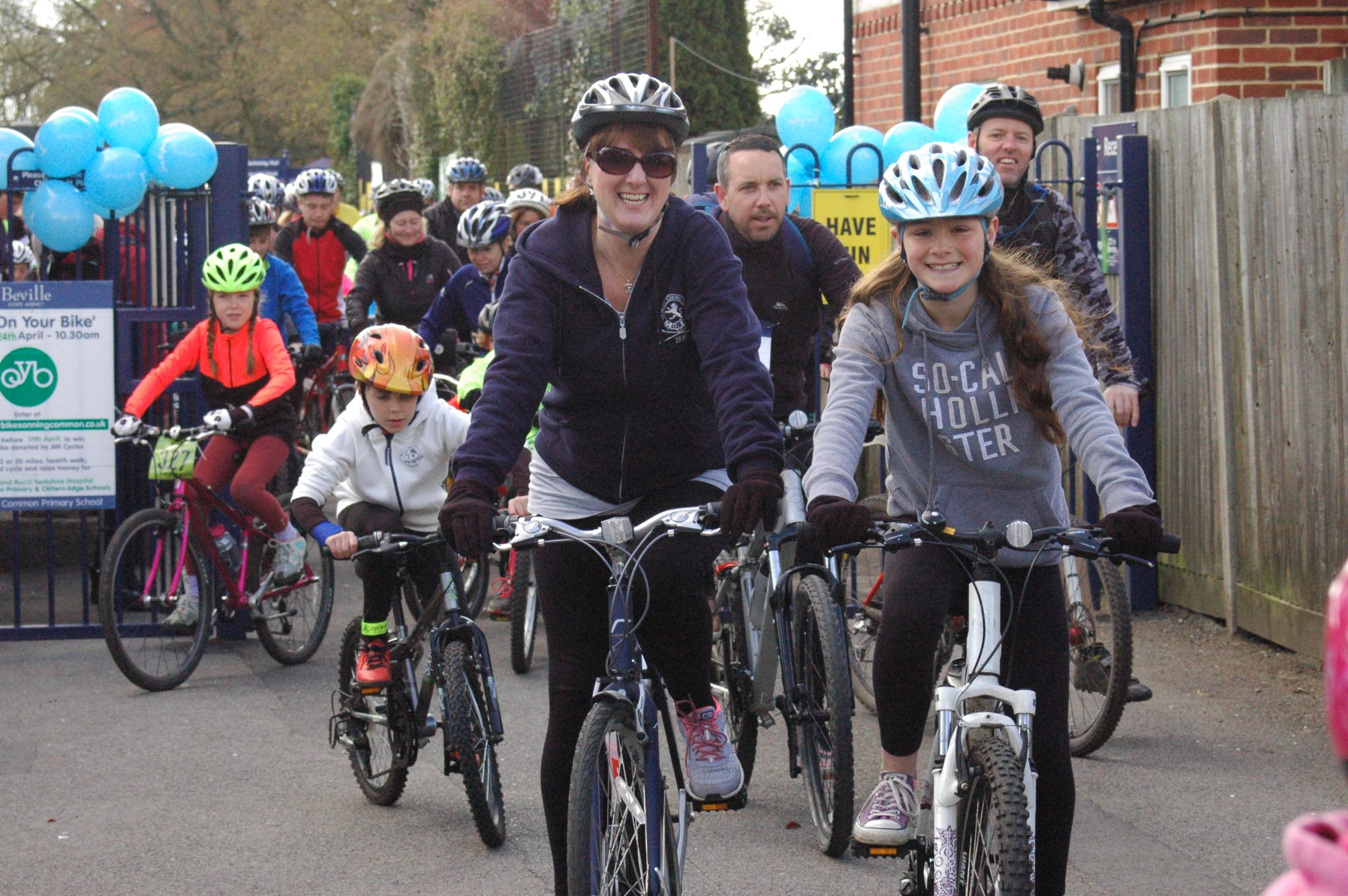 Register before 9pm on Sunday March 26th for the chance to WIN A BIKE! kindly donated by AW Cycles

Go on you know you want to! 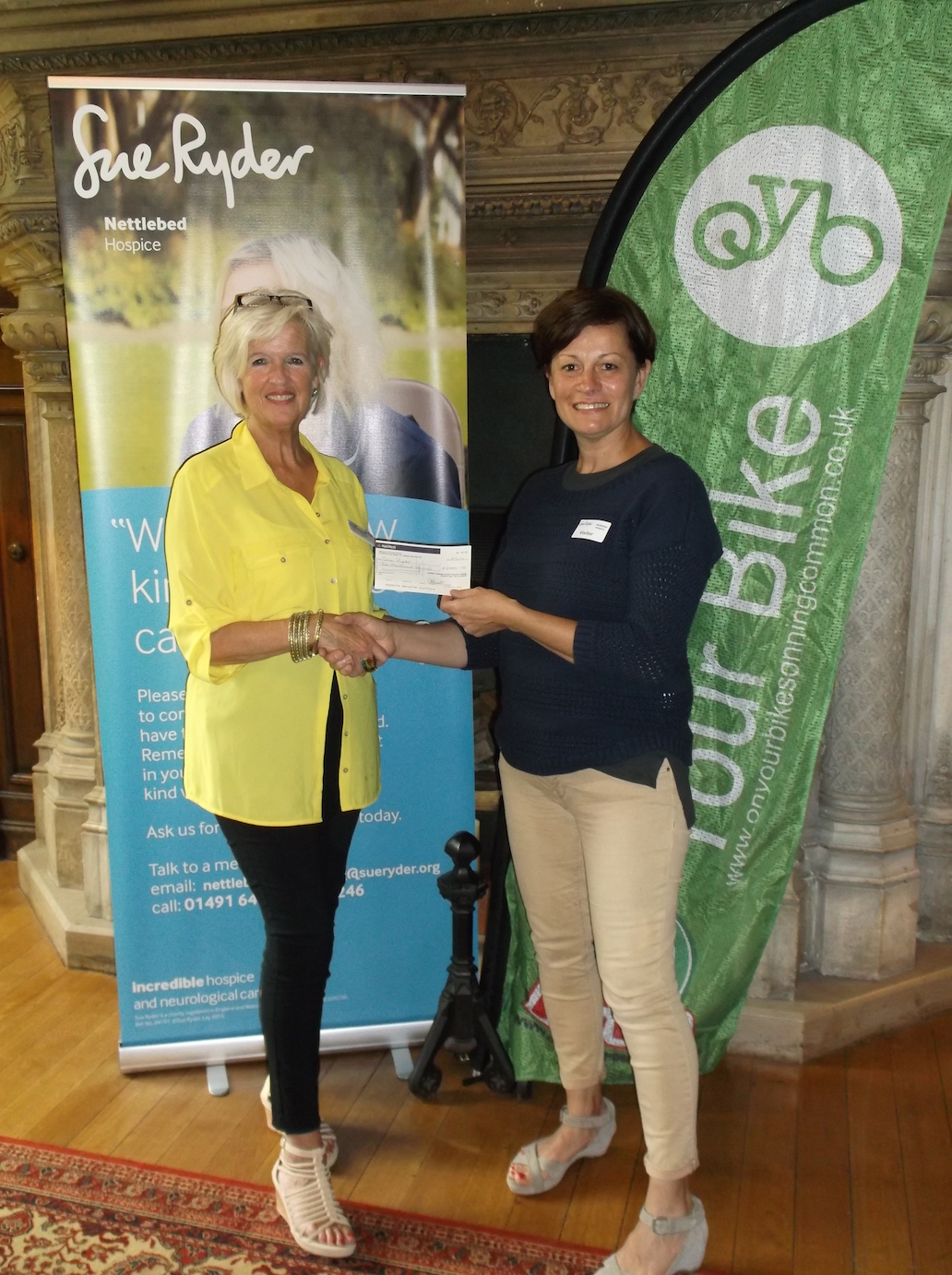 Photo: On Your Bike Organiser, Tina Micallef, presenting a cheque for £2000 to Sue Ryder’s Nettlebed Hospice.

Thank you so much to everyone who took part in On Your Bike 2016 – our tenth ride!

In total you helped us raise:

£500 for the Cardiac Care Unit at the RBH 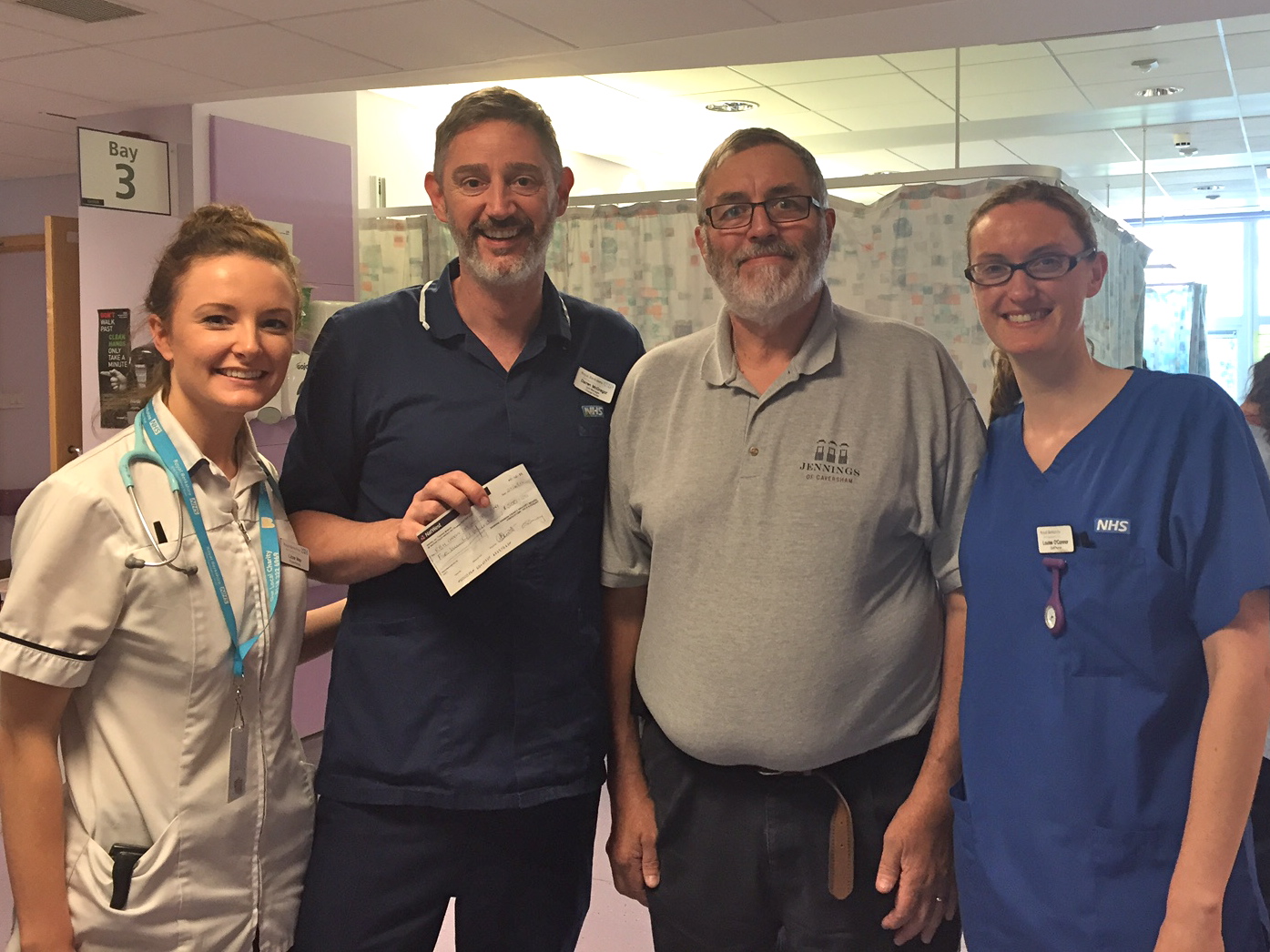 Photo: On Your Bike sponsor, Nick Jennings, from local butchers Jennings of Caversham, presenting a cheque for £500 to the Cardiac Care Unit at the Royal Berkshire Hospital.